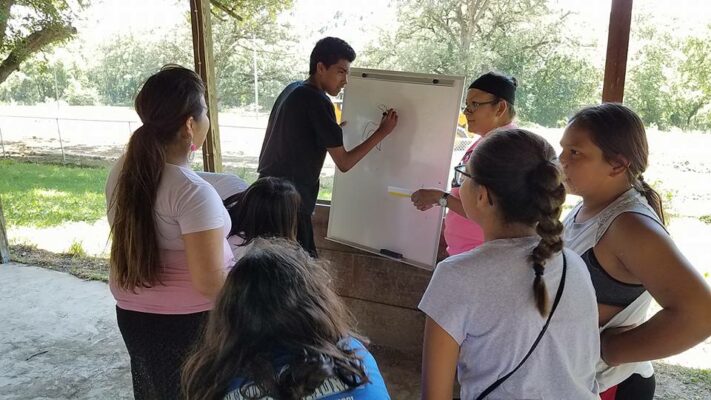 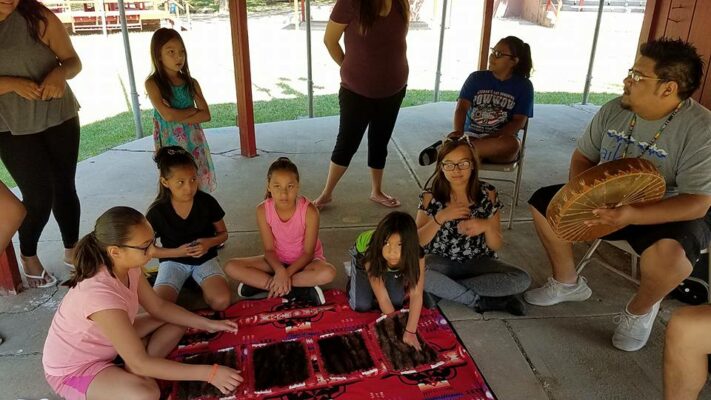 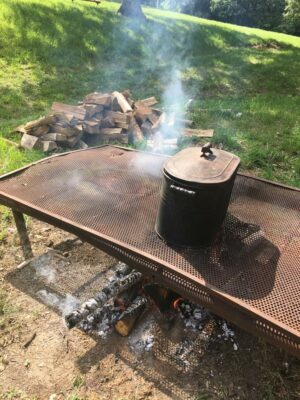 HoChunk Renaissance was founded in May 2001 with a mandate from the Tribal Council of the Winnebago Tribe of Nebraska. Despite a strong desire to teach the HoChunk language and culture, the program did not meet with immediate success. Neither the director nor the research assistant spoke HoChunk, and HoChunk Renaissance had trouble retaining a fluent speaker to teach the language.

In the fall of 2001, HoChunk Renaissance conducted a survey of the Winnebago residents. They learned that, while few people knew the HoChunk traditional ways, most, if not all, were interested in reviving their culture.

In early 2003, the original director resigned and Janet Bird was promoted to the director position. In April of that year, the Tribal Council met with Bird, new employee Beverly Snow Peterson and several community members. The Tribal Council challenged this group to create a viable plan and budget for the future of HoChunk Renaissance.

The HoChunk Renaissance planning group envisioned several teaching teams working to revive the HoChunk ways. Each team would consist of one fluent speaker/teacher, one apprentice with marginal language skills, and one support staff member. These groups would encourage the apprentices to improve their skills while the whole team taught HoChunk in the community.

The Tribal Council approved the budget and plan, and within a week, nine new employees signed on. HoChunk Renaissance began teaching classes community-wide and planning curricula for teaching in the schools that fall.

In the fall of 2003, the HoChunk Renaissance teaching teams completed an initial curriculum and began teaching language classes to students of all ages. Teaching teams offered classes at daycare and HeadStart facilities, public and private schools, and Little Priest College.

Pictured here is an example of the Siouan language tree 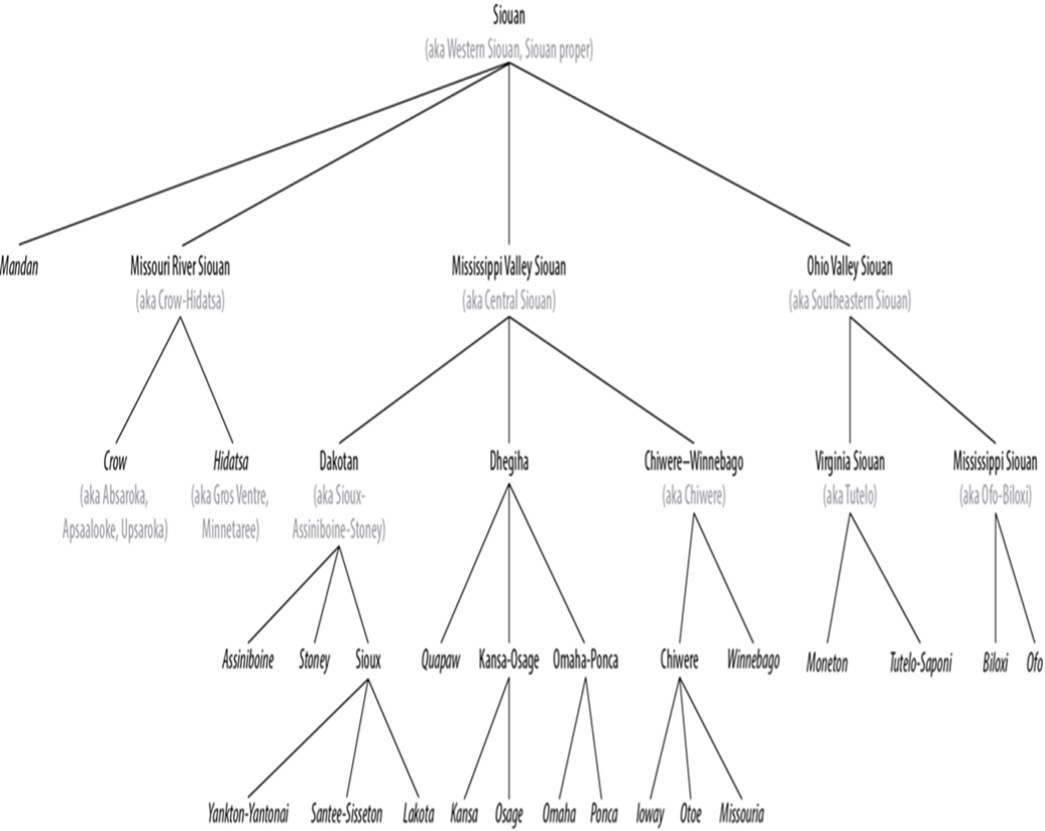 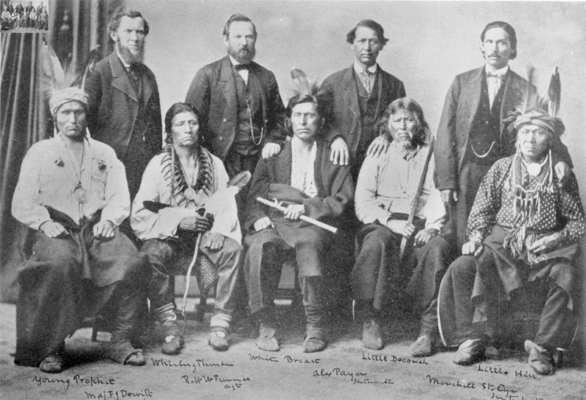 In 1832, the Winnebago Tribe was coerced into signing a treaty calling for their removal from their traditional homelands.

The initial movement took place in 1837.

The Winnebago Tribe was moved to its first reservation at Decorah, Iowa in 1837. During this time a sizable number of Winnebago families moved on their own back to the area which is now Wisconsin.

Preceding the opening of the Iowa territory for settlement, the Winnebago Tribe was moved once again. This time to Long Prairie, Minnesota, this being their second reservation. At this time, several more Winnebago families returned to the area of Wisconsin on their own.

In 1846, the Winnebago Tribe was forced to move again. This time it was to Southern Minnesota in the area of Blue Earth. This was to be their third reservation.

In 1853, a new treaty was made by which they were allowed to remove to the Crow river. This treaty was not ratified because of the remonstrance of the people of Minnesota. On February 27, 1855, they ceded their Long Prairie reservation and were granted a tract of land eighteen miles square on the Blue Earth river, just south of Mankato, in Southern Minnesota. They settled here in the spring of that year and immediately began the erection of dwellings and improvement of the land. The teacher of the reservation school reported in 1860 the enrollment of 118 pupils. In the midst of their prosperity, in June, 1862, came the “Sioux Massacre,” which completely wrecked their future prospects. Although they took no part in that affair and even though they offered to the government their services in punishing the Sioux, the frightened inhabitants of Minnesota demanded their removal.

The Winnebago Tribe was moved to their fourth reservation following the great Sioux uprising in 1863.

By a special act of Congress, they were hastily removed in a scandalous manner and suffering great hardships, in May and June of that year, to Ushers Landing, on the Missouri River, in South Dakota. At the time of this removal, the old chiefs, Decorah, Winneshiek, Dandy and their families, and other members of the tribe, fled to Wisconsin. By order of the President (July 1, 1863), there was set aside for them a reserve just below Pierre, and adjoining the Crow Creek reserve of the Sioux, on the east side of the Missouri River, in South Dakota. Here they became greatly dissatisfied with the nature of the soil and water and the lack of timber, and were reported to be engaged in making canoes with the intention of leaving to join the Omaha and other tribes down the Missouri River. The Indian agent of the Omaha reservation, in northeastern Nebraska, reported in October 1863, the continued arrival of small parties of Winnebago, in a very destitute condition. For these he was instructed to care. On March 8, 1864, the Dakota reservation was ceded back to the government and by September of that year, 1200 Winnebago had arrived at the Omaha reservation. These were provided with a tract of land for temporary residence and cultivation. On March 6, 1865, they purchased a large section of the Omaha lands. On June 22, 1874, a second tract was purchased from the tribe. In August 1865, the superintendent of the reservation reported the Winnebago as being “characterized” by frugality, thrift and industry to an extent unequalled by any other tribe of Indians in the Northwest.

In 1865 facing problems of disease, malnutrition and possible extinction, the Winnebago Tribe took it upon itself to move to which is now the Northeast corner of Nebraska. Once this move was accomplished the Winnebago Tribe entered into its last treaty with the United States Government. The treaty involved the purchasing of some 127,000 acres of land from the Minnesota Historical Collections. Winneshiek was the head chief of the Winnebago. The deliberations and the accompanying feast lasted for several days and were “closed with a wedding the Winnebago giving one of their beautiful maidens to some noted brave of the Sioux. The presents given to the bride were quite valuable.” About thirteen hundred were removed to Minnesota at this time, leaving, it was estimated about four hundred still remaining in Iowa and Wisconsin. Others were removed in 1850.

In 1873, a last attempt was made by the government to remove the one thousand or more Winnebago, estimated to be still remaining in Wisconsin. Captain Hunt, who was in charge of the removal sent runners to all of the bands with notice to report at Sparta for shipment to Nebraska. But it was necessary to employ the military, who found Big Hawk with thirty others holding a feast at the Baraboo river. On their refusal to leave they put handcuffs on Big Hawk, who made no resistance. They were all marched into Portage, and there put aboard the cars. Some were found on the Fox and Wisconsin rivers. In some camps the troops found only women and children whom they marched off, the men following them when they returned. Great hardship was suffered by all of the Indians, many dying on the way and others from exposure after reaching Nebraska. Several hundred Winnebago were removed, but many more Omaha Tribe to establish their fifth and final reservation which has come to be known as the Winnebago Tribe of Nebraska.